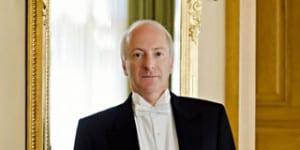 After graduating from the Royal College of Music Richard Blackford was appointed Composer In Residence at Balliol College Oxford. His work is performed and broadcast all over the world and has been featured in the Adelaide, Cork, Montepulciano, Brighton, Cheltenham, Long Island and Berlin Festivals. It has been recorded on the Sony, Decca, Argo, Warner Classics, EMI, Quartz and Signum labels. Awards include First Prize at the Houston Film Festival, The Royal Television Society Award, the Mendelssohn Scholarship and the Tagore Gold Medal. In 2000 he wrote a four-hour choral and orchestral score for CNN/BBC Millennium, which won an Emmy Award for Best Title Sequence and for which Richard was nominated for Outstanding Achievement in Music. His collaborators include Ted Hughes, Maya Angelou, Tony Harrison and Alistair Beaton. In 2008 he became the first ever Composer in Association to the Brno Philharmonic.

Richard has written extensively for the theatre, and his credits include: The Laborers of Herakles, The Kaisers of Carnuntum (both by Tony Harrison); also The Prince’s Play (National Theatre), The Pig Organ (Royal Opera House), King (Piccadilly Theatre), and Follow My Leader (Birmingham Rep and Hampstead Theatre). Both of his critically acclaimed choral works Mirror Of Perfection (Sony Classical) and Voices of Exile (Quartz Records) were the subjects of television documentaries and have been frequently broadcast on Classic FM and BBC Radio 3.

His feature film credits include City of Joy, Prometheus and Song For A Raggy Boy, the latter winning eleven international film festival awards. He has composed the music for over one hundred and ten 90-minute dramas for ZDF Germany. UK TV drama credits include Fingersmith, A Little Bit Of Lippy, Summer Solstice, Ruth Rendell Mysteries, 1940s House, Family, Finding Sarah, Preston Front, The Shell Seekers, Starting Over, The Vanishing Man, Pigeon Summer, Perfect Scoundrels, and, with Tony Harrison, The Shadow Of Hiroshima, Metamorpheus and A Maybe Day in Kazakhstan.

2010 saw performances of his acclaimed Clarinet Quintet at both the Cheltenham and Luhacovice Festival in the Czech Republic, and the premiere of his Te Deum in Westminster Abbey. His cantata Mirror Of Perfection received its German premiere in Cologne, bringing the total number of performances to over eighty.

2011 saw the premiere of his 55-minute choral work Not In Our Time at the Cheltenham Festival and subsequently at The Lighthouse, Poole. It was commissioned by the Bournemouth Symphony Chorus for its Centenary and performed by them and the Bournemouth Symphony Orchestra, conducted by Gavin Carr. The recording by Nimbus Records went to No.2 in the Classical Charts in the second week after its release. Subsequent performances in Chicago, USA in 2012 and Bremen, Germany, achieved standing ovations and critical acclaim.

In 2012 his Oboe Concerto The Better Angels Of Our Nature was premiered by Emily Pailthorpe with the Redlands Symphony Orchestra, California, and was commercially recorded and given its UK premiere in 2013.

The premiere of The Great Animal Orchestra, in 2014,  a 30-minute commission from the Cheltenham Festival for large orchestra and sampled wild soundscapes, in collaboration with the world renowned pioneer of soundscape recordings and author Bernie Krause was followed by a special performance by London Schools Symphony Orchestra at Musicfest Aberystwyth.

Click here to find out more about The Great Animal Orchestra Symphony and here for more information about Richard Blackford.